Deaths. Arson. Nationwide curfew. Sri Lanka has witnessed unprecedented violence over the past two days as the protest over the country’s economic crisis continues. Mahinda Rajapaksa, who resigned as Sri Lankan Prime Minister on Monday, is facing calls for arrest for inciting violence that claimed at least eight lives.

The supporters of Mahinda Rajapaksa attacked the anti-government protesters demanding his ouster over Sri Lanka’s worst economic crisis that has led to acute shortages of food, fuel and medicines and prolonged power cuts.

Mahinda Rajapaksa finally quit from his post on Monday, but violence erupted in the island nation soon after his resignation.

The Sri Lankan defense ministry has announced shoot-on-sight orders to quell riots, as per a report by AFP.

Here’s all that has happened in crisis-hit Sri Lanka:

Mahinda’s resignation came hours after his supporters attacked anti-government protesters outside President Gotabaya’s office, leaving around 173 people injured and triggering widespread violence against pro-Rajapaksa politicians. At least four people, including a ruling party MP, were killed in the subsequent violence.

After Rajapaksa’s resignation, violence erupted across the nation. Monday’s violence triggered widespread anger, with people singling out Rajapaksa supporters and attacking them in many parts of the country.

Vehicles owned by pro-government supporters were dumped in a lake in Colombo. (Image: Reuters)

As per the police, five people died in the violence in the nation on Monday. The Rajapaksa family’s ancestral home in Hambantota was also set on fire by protesters.

The government imposed a nationwide curfew and deployed army troops in the capital Colombo. 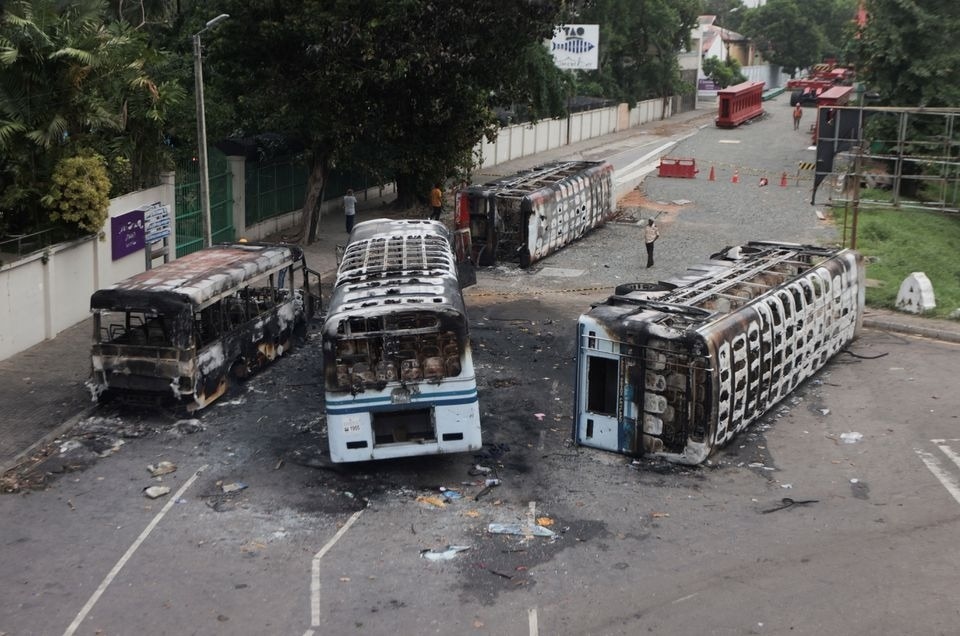 Burnt vehicles of pro-government supporters were set on fire during the clashes that erupted in Colombo. (Image: Reuters)

Mahinda Rajapaksa is facing calls for his arrest from Opposition politicians for inciting violence against peaceful anti-government protesters. He has been accused of inciting the ruling party mobs to attack peaceful protesters by making a defiant speech while addressing several thousands of his supporters to deflect calls for his resignation.

“Rajapaksa (Mahinda) must be arrested and brought before the law,” M A Sumanthiran, the main Tamil legislator, said in a message.

Mahinda Rajapaksa, along with his family, fled his official residence and took shelter at a naval base in Trincomalee on Tuesday. 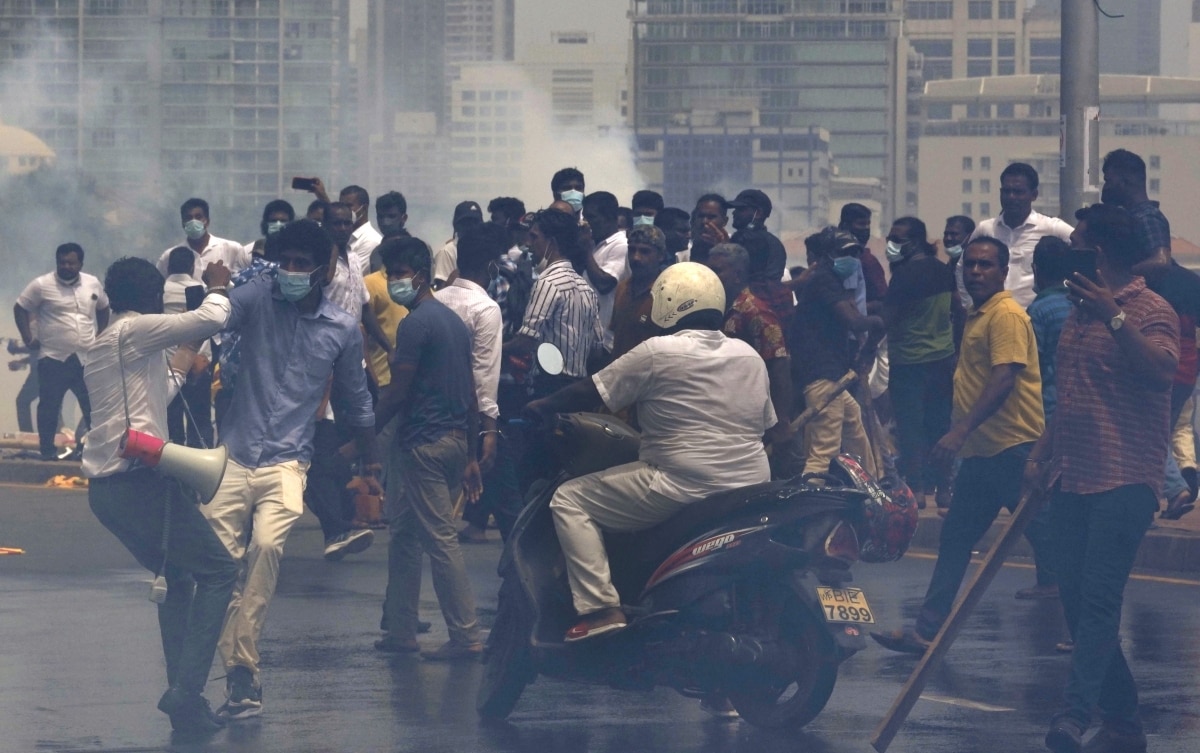 Mahinda Rajapaksa left his official Temple Trees residence early on Tuesday morning even as a mob tried to enter the premises. Throughout the night on Monday, the police fired teargas shells to dissuade mobs trying to enter the former PM’s residence.

On Tuesday, a protest began in front of Sri Lanka’s Trincomalee Naval Base after reports emerged that Mahinda Rajapaksa and some of his family members were there after leaving the official residence in Colombo.

The anti-government protesters have reportedly set up a checkpoint on the road leading to the Bandaranaike International Airport in Colombo to prevent the Rajapaksa family loyalists from fleeing the country.

“Large group of people have set up a checkpoint on the road leading to the Katunayake Airport. They are trying to prevent ruling faction loyalists from fleeing the country,” as per report by News 1st channel .

President urges people to stop ‘violence and acts of revenge’

On Tuesday, Sri Lankan President Gotabaya Rajapaksa urged people to stop “violence and acts of revenge” against fellow citizens and vowed to address the political and economic crisis facing the nation. 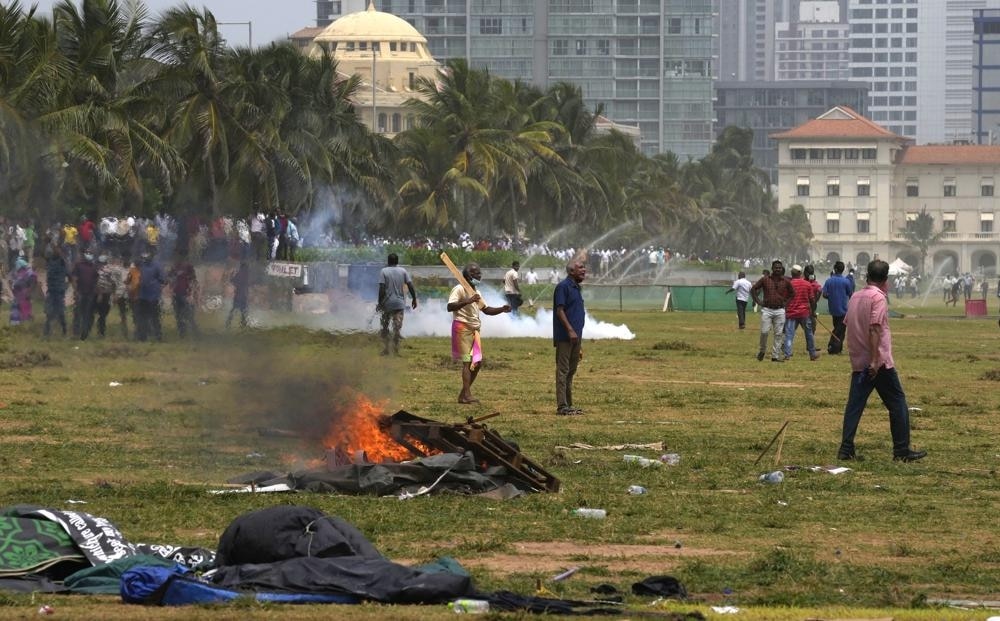 “I appeal and urge people to remain calm & stop violence & acts of revenge against citizens, irrespective of political affiliations. All efforts will be made to restore political stability through consensus, within constitutional mandate & to resolve economic crisis,” President Gotabaya tweeted in his first comments since the outbreak of the violence that saw arson attacks on the homes of several former ministers and politicians.

I appeal and urge people to remain calm & stop violence & acts of revenge against citizens, irrespective of political affiliations.

All efforts will be made to restore political stability through consensus, within constitutional mandate & to resolve economic crisis.

WHAT WAS THE STARTING POINT OF PROTEST?

Sri Lanka is struggling to stay afloat amid the deepening economic crisis with the island nation on the brink of bankruptcy, with nearly USD 7 billion of its total USD 25 billion in foreign debt due for repayment this year.

A severe shortage of foreign exchange means the country lacks the money to buy imported goods. People have endured months of shortages of essentials like food, cooking gas, fuel, and medicine, and lining up for hours to buy the very limited stocks available.

In April, Sri Lankans, who are blaming the government for the worst economic crisis since its Independence in 1948, marched along dark streets and gathered outside President Gotabaya Rajapaksa’s house in capital Colombo to stage a protest. They even tried to storm his residence but were stopped by armed soldiers.

The protest has continued over the past month as the country’s economy swiftly unraveled in recent weeks.

(With inputs from PTI, AP)

Aaj Ka Panchang, 06 December, 2022: Tithi, Shubh Muhurat, Rahu Kaal and Other Details for Tuesday
SC: Can there be a law to protect privacy when gadgets seized? | India News - Times of India

Love and Relationship Horoscope for December 6, 2022