Home » Entertainment » Karan Johar is in awe of Hrithik Roshan’s ‘swag’ in ‘Vikram Vedha’; calls him the ‘ultimate leading man of mainstream movies’ – Times of India

Taking to his Twitter handle, Karan wrote, ‘Hrithik Roshan is a force of nature… from his sinister smile to his solid swag … he is the ultimate leading man of the mainstream movies…. His VEDHA is a lion, tiger and a panther all rolled into one!!! Wow!!’ 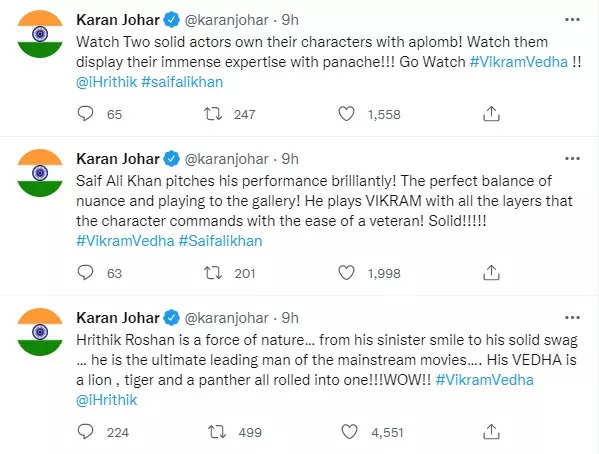 He also showered praise on Saif’s performance in the movie. He wrote, ‘Saif Ali Khan pitches his performance brilliantly! The perfect balance of nuance and playing to the gallery! He plays VIKRAM with all the layers that the character commands with the ease of a veteran! Solid!!!!!’

“Watch two solid actors own their characters with aplomb! Watch them display their immense expertise with panache!!! Go Watch #VikramVedha!!’, he said in another tweet.

‘Vikram Vedha’, which released on September 30, set the cash registers ringing at the box office on its first day after it grossed Rs 10 crore approximately. According to a report in boxofficeIndia.com, the film has scored less that ‘Shamshera’ in circuits like Gujarat and Maharashtra.

Directed by Pushkar and Gayathri, the film is an official Hindi remake of the Tamil film of the same name. The original movie starred R Madhavan and Vijay Sethupathi in lead roles.

PrevAbhishek Bachchan cheers for wife Aishwarya Rai’s ‘Ponniyin Selvan: I’, calls it a ‘masterpiece’ – Times of India
Asha Parekh on winning Dadasaheb Phalke Award: It feels as if all my desires are now fulfilled – Times of IndiaNext