After thrashing South Korea 4-1, Brazil star Neymar has insisted the five-time champions are dreaming of winning the World Cup again in Qatar. 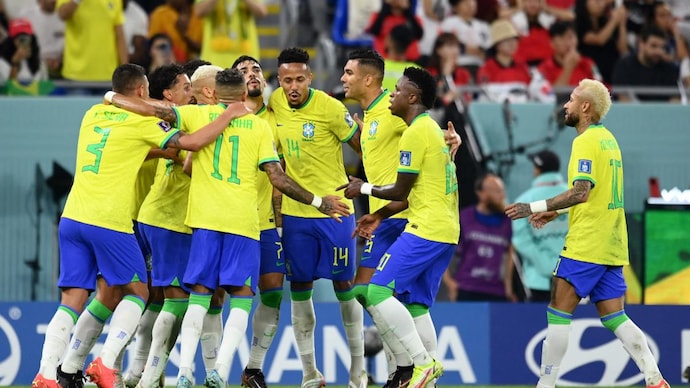 By India Today Web Desk: Brazil star Neymar insists the five-time champions are dreaming of winning their sixth World Cup title after setting up the quarter-final clash with Croatia following a 4-1 win over South Korea on Tuesday. The PSG forward scored his 76th international goal– one shy of the great Pele’s international haul– during their 4-1 win over South Korea.

The Brazilians brought a beach soccer swagger to the iconic Stadium 974 with a performance that simply outclassed the Koreans and likely frightened potential opponents.

“Today was the fourth game, there are three left. We’re very focused on getting that title.”

In the 13th minute, Neymar scored his first goal of this year’s World Cup after kissing the ball and calmly sending a low shot from the spot while waiting for the goalkeeper to choose a side. He danced as his teammates huddled around him, then joined in on the dance moves with Vincius Junior and other teammates before raising his arms to the sky and smiling broadly.

Neymar was forced to withdraw from the 2014 World Cup in Brazil after suffering an injury in the quarterfinals. As he walked off the field after the game, fans chanted his name. In the 81st minute, he was replaced.

Brazil have not won the World Cup since 2002, when a Ronaldo-inspired team defeated Germany 2-0 in Yokohama. However, the five-time world champions are among the favourites after a qualifying campaign that included 14 wins, three draws, and no defeats.

Brazil saw the game out – spurning half a dozen good chances before the end – before unfurling a banner of Pele, and dancing once more to celebrate with fans. “Let’s hope we can carry on dancing all the way to the final,” Vinicius said. “And we are also sending a big hug to Pele. Let’s hope he recovers quickly.”